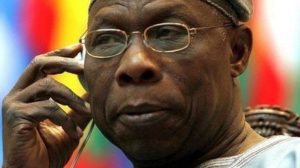 A former Personal Assistant to ex-President Olusegun Obasanjo on Security and Protocols, Simeon Eze, has joined the All Progressives Congress (APC).

Jonathan Zwingina, the Chairman of APC Registration and Revalidation Committee in Enugu, was present during Eze’s registration at the local government party secretariat in Ibagwa-Aka.

The APC also received some Peoples Democratic Party (PDP) youths from Unadu Ward of the LGA.

“I decided to join the ruling party at the centre because President Buhari has done very well especially in his war against corruption.

“I will support APC to change the narrative in Enugu state. A situation where PDP wins all the elective positions in the state will longer be possible in 2023,” he said.

Eze, who was PA to Obasanjo from 1999 to 2007, said it was his first time joining a political party.

This newspaper had earlier Former Chief of Army Staff Lieutenant-General Azubuike Ihejirika has officially joined the All Progressives Congress (APC).

Naija News reports that Ihejirika, who was the Chief of Army Staff between 2010 – 2014 under former President Goodluck Jonathan, joined the APC at Isuikwuato country home in Abia-North Senatorial District.

Speaking after joining the APC, General Ihejirika said that he’s coming into politics by joining the APC is to contribute to the progress of the party at the state and national level.

In his words “I am delighted by the presence of the leader of the party in our state, Senator Orji Uzor Kalu to honour this event.

“Having served almost 38 years in the military, I am convinced that it will be a waste of experience for me to remain outside government activities.

“This is because I have a lot to offer and assure you all that I will operate an open-door policy, I will also learn fast.

“My first goal is to unite the party, unity is very important because if we are united we can achieve all our goals for the state and the nation at large.”.