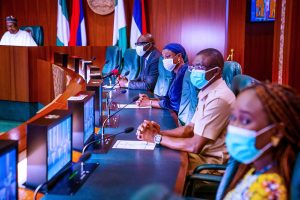 The Governor of Edo State, Godwin Obaseki on Friday paid a courtesy visit to President Muhammadu Buhari at the Aso Rock Presidential Villa in Abuja.

This will be the first meeting between the Governor and President Buhari since he emerged victorious at the September 19 governorship election in Edo State.

Naija News gathered the Governor was accompanied on the visit by his deputy, Philip Shuaibu, their spouses as well as some lawmakers from the state.

Speaking to State House correspondents after the meeting, Governor Obaseki disclosed that he was on a “thank you visit” to the President.

It will be recalled Obaseki joined the Peoples Democratic Party (PDP) after he was screened out of participating in the governorship election primaries of the All Progressives Congress (APC).

He went on to get the PDP flag for the Edo governorship polls and defeated all other candidates including Osagie Ize-Iyamu of Buhari’s APC.

However, Obaseki while speaking to newsmen after meeting the President, used the opportunity to address concerns about a possible return to the APC, declaring it would be immoral to do so.

He noted that such a move would negatively affect his credibility.

Obaseki also promised not to become a new godfather in Edo politics after ousting Adams Oshiomhole, stating that if he does, “I should be dealt with accordingly.”