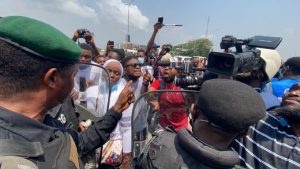 Lagos State Commissioner Of Police, CP Zubairu Muazu mni has arrived at the Lekki Toll Gate, the venue for the #OccupyLekkiTollGate protest were  a number of residents were apprehended on Friday (today).

Naija News had reported that the police on the early hour of today arrested popular comedian, Mr Macaroni and some others who stormed the toll gate to express dissatisfaction with the reopening of the Lekki toll gat following the massacre that happened during the #EndSARS protest a few months ago.

It could be recalled that the Governor Babajide Sanwo-Olu government and the federal government earlier warned that no protest should hold at the Lekki toll gate.

However, some youths took a bold step to come out in huge numbers to carry out the excercise.

Watch moment the Lagos CP arrived the scene a few minutes ago: