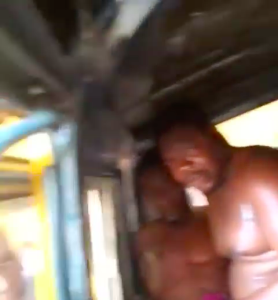 Popular comedian Debo Adebayo, also known as Mr Macaroni, alongside other protesters arrested by the Lagos State Police Command on Saturday morning, have been subjected to inhumane conditions.

In footage shared online by actor, Yomi Fabiyi, Macaroni is seen without a shirt crammed with other arrested protesters in a small bus. Some of the protesters had their hands tied behind their backs.

The video has generated negative reactions from Nigerians, condemning the police for subjecting the protesters to such terrible conditions.

“This is DE-HUMANIZING and UNACCEPTABLE. Every human being must be treated with dignity and respect.”

Watch the footage below: