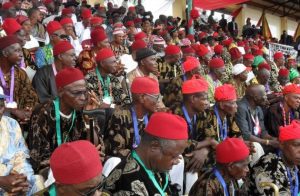 Governor David Nweze Umahi’s effort to settle the misunderstanding between both factions of Ohanaeze Ndigbo has reportedly ended in deadlock.

Naija News understands that the Ebonyi State governor who doubles as the Chairman of the Southeast Governors’ Forum had attempted to tackle the issue of supremacy between the groups but all effort ended in a stalemate.

The peace meeting held at the Imo state government house was said to have witnessed the presence of Gov. Hope Uzodinma of the State. An insider told reporters that the Chidi Ibeh-led Ohanaeze was invited by the governors with the hope of prevailing on them to back down for the Amb. George Obiozor-led Ohanaeze.

The source, however, revealed that Ibeh and his team stood their ground on not stepping down, insisting that they remained the authentic Ohanaeze national executive members.

Also in attendance were Chief Emmanuel Iwuanyanwu, Obiozor, Chief Gari Igariwey, among others.

Meanwhile, the leader of the Indigenous People of Biafra (IPOB), Nnamdi Kanu, has accused the Western Nigeria Security Network, codenamed Amotekun, of been politicized.

He stated this while reacting to Governor of Bauchi, Bala Mohammed’s comments that herdsmen carry AK-47 against cattle rustlers for self-defence, Naija News reports.