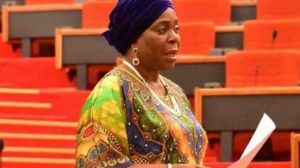 The appeal court sitting in Kaduna had on November 6, 2019, upheld the tribunal judgment sacking the candidate of APC, Prince Dayo Adeyeye and declared Olujimi winner of the Ekiti South senatorial election held on February 23.

A group of APC members led by Senator Tony Adeniyi had alleged that Governor Fayemi influenced the judges to subvert justice in her favour.

They claimed Fayemi bribed judges of the tribunal and the appeal court at her behest to reclaim the senatorial seat.

She said the allegation was not only an insult on her integrity but also a calculated attempt to smear the pedigree of the judges.

Olujimi said: “For the umpteenth time, I am not a member of the APC and will never seek refuge from my enemies.

“Dr Kayode Fayemi is the governor of Ekiti State and I will accord him his due respect as I have done for others before him, it doesn’t make me a member of his party.”