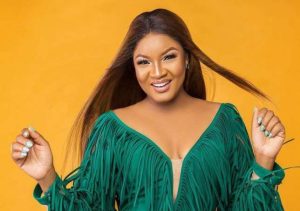 Omotola Jalade-Ekeinde, has announce her recovery from COVID-19, barely a week after she announced that she had been down with the deadly disease.

This was made known by the 42-year-old actress yesterday, on the popular filmmakers’ WhatsApp group, Filmic, while reacting to the debate on how Nollywood can adhere strictly to the health guidelines of COVID-19, before reopening productions.

She further revealed that she infected her son and daughter before they realised it.

She said she was treated by the No1 infectious disease doctors.

She noted that a lot of people are infected with the virus because there’s no widespread testing, and as such, whenever they feel unwell they attribute it to malaria, diarrhea among other ailments.

On how she contracted the disease, she said she started feeling unwell after she left a movie set on Monday, August 3, 2020.

She narrates: “I hardly fall ill and so when I left the set and started having chills the next day or so, I knew something wasn’t right. I thought it might be stress. This was on Monday, August 3. I waited till Tuesday and it got worse. I was shaking uncontrollably and my temperature was going through the roof.”

“My spirit told me immediately, this is not malaria or fever. I have been extremely careful and paranoid about this COVID-19 stuff. So I told hubby I needed to be tested immediately. I have a son that has Asthma!”

She said they tested her on Wednesday and the test came out as positive on Thursday evening.

My world crashed. I felt crazy and empty.”

She noted her symptoms were high fever and chill, but added that it was so bad that the doctors were really contemplated coming to evacuate him as her viral load was high and she wasn’t getting better … but God arose for me.

I went into isolation immediately. We got my result but my daughter started feeling funny.”

“So they had to come test the whole family … I had infected my daughter and asthmatic son !

My God showed up for me as my son is asymptotic, so positive but not sick ! My daughter lost her smell and taste and had severe diarrhea. All has stopped now, thank God.”

“My husband and last son tested negative respectively. We are all now in remission … taking another test soon.”

“It’s physically, spiritually and emotionally exhausting as the doctors tell you it’s a 50/50 chance . Nothing you do really saves you . You can only take the vitamins, manage the symptoms and hope your body fights,” the admirable actress narrates.