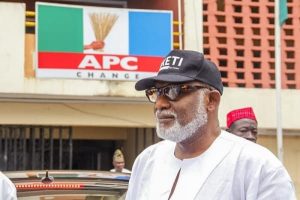 The incumbent governor of Ondo State, Rotimi Akeredolu has opened up an early lead as the counting of votes continues in the All Progressives Congress (APC) governorship primaries for the state.

As at the time of filing this report, Governor Akeredolu led in two local government areas of Akoko North East and Akoko North West.

He polled over 300 votes while his closest rival in the sorted ballot, Chief Olusola Oke garnered 23 votes.

Other aspirants that got votes were Ambassador Iji with two votes, Dr. Nath Adojutelegan one vote and Hon Isaacs Kekemeke one vote.

Sorting and counting are ongoing for other local government areas and updates will be provided as more results trickle in.