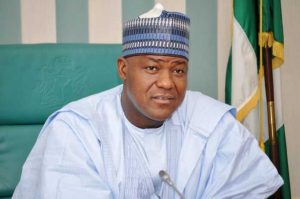 The Peoples Democratic Party has picked the former Speaker of the House of Representatives, Yakubu Dogara as the chairman screening committee for aspirants in the upcoming primary election in Ondo state.

Others in the committee are Bunmi Jenyo (secretary), Zainab Kure, Fred Agbedi, and Ndubuisi Agwuama.

According to a statement signed by Kola Ologbondiyan, national publicity secretary of the party, “the screening is scheduled to hold on Thursday, July 2, 2020, at the NWC Hall at the PDP National Secretariat, Abuja at 10 a.m.”

Equally, the Independent National Electoral Commission (INEC) has said it would not embark on new registration of voters, distribute PVCs, nor carry out transfer and replacement of lost or defaced PVCs owing to the ravaging coronavirus.

Speaking at a press briefing in Akure on Wednesday, the Resident Electoral Commissioner for INEC in Ondo, Rufus Akeju, reportedly said the state has 1,822,346 registered voters with 1,478,470 PVCs collected.

However, Naija News recalls that about eight members of the main opposition party have signaled an intention to run for the topmost political position in Ondo State currently been held by Arakunrin Rotimi Akeredolu.