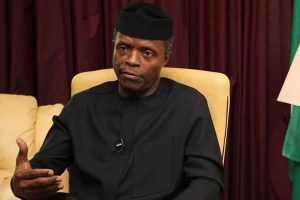 The Vice President, Yemi Osinbajo is set to lead other leaders of the All Progressives Congress to the flag off the re-election rally of the party’s Governorship candidate in Ondo State, Rotimi Akeredolu.

The development was confirmed by the spokesperson, Akeredolu/Aiyedatiwa Campaign Organisation, Olabode Richard Olatunde, in a statement released to newsmen on Wednesday in Akure, the state capital.

Olatunde in the statement noted that the campaign will commence on Saturday by 11 am at the Akure township stadium.

He further stated that other national leaders of the party and state governors are expected to be seated before the start of the programme.

Olatunde called on members of the party, supporters and lovers of the governor to join the campaign and come and show their support for the governor.