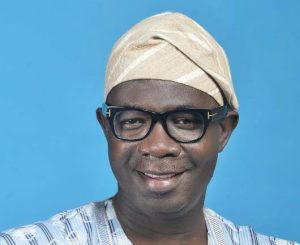 The Deputy Governor of Ondo State, Agboola Ajayi has received a boost in his bid to become the next Governor of the south-west province under the People’s Democratic Party.

This is as the PDP has granted him a waiver to contest for the party’s flag in the forthcoming governorship poll.

The approval was also contained in a letter dated 26th June 2020, and signed by both the National Chairman, Prince Uche Secondus and the National Secretary, Senator Umaru Ibrahim Tsauri.

The Deputy Governor is said to be happy about this development and urge his teeming supporters particularly, members of the party, to buckle down in a view to ensuring success at the primary first and eventually at the general election slated for October 10th, 2020.

Here is the picture of the waiver letter below. 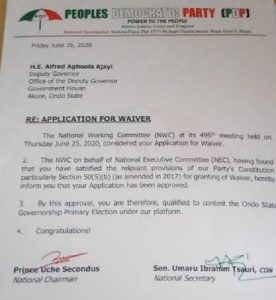 It will be recalled the Ondo Deputy Governor recently resigned from the APC and joined the APC, but refused to ressign as the deputy governor of the state.