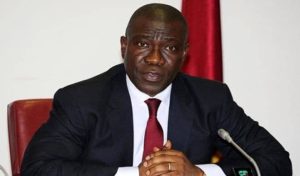 The former Deputy Senate President, Ike Ekweremadu, has revealed that the Peoples Democratic Party will be victorious in the forthcoming governorship election in the Ondo State.

The lawmaker stated this while speaking in Akure, the state capital, on Wednesday after monitoring the delegates’ election across the 18 local government areas of the state.

He said, “PDP is well-positioned in Ondo State and we are ready to take over power in the state. Members here have resolved their differences and they are willing to work as a team to dislodge the APC.”

“In the last election, we have two senators and APC has one. That is to show that we are ready and prepared to win Ondo State.”

Ekweremadu, while speaking on the crisis over the delegates list in the party, he said, “There were some complaints and I am happy those complaints have been resolved. The July 22nd date for the PDP primaries in Ondo is still sacrosanct.”

“You can see that the delegate election was free and fair. It was well conducted and we are happy with the outcome. There was no violence. Nobody spotted any cheating.”

“Part of our earlier problem was disunity in the party and there were some people who were disrupting the party issues and programme. I believe our people in the PDP in Ondo have learnt their lessons.”