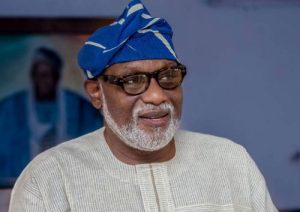 Naija News reports that this is following the death of the former Ondo State Commissioner for Health, Wahab Adegbenro.

In a statement on Saturday by Senior Special Assistant on Media and Publicity, Ojo Oyewamide, Akeredolu also appointed the Vice-Chancellor of the University of Medical Sciences, Ondo, Adesegun Fatusi, as the new chairman of the State Inter-ministerial Committee Against COVID-19.

“Fatusi is the current Vice-Chancellor of the University of Medical Sciences, Ondo and he is expected to continue from where our late medical hero, Adegbenro stopped. His appointment is aimed at preventing a vacuum as the state experiences a disturbing spike of repeated cases of COVID-19.

Recall that the death of Dr. Wahab Adegbenro was announced to newsmen on Thursday.

The former Health Commissioner died at the Federal Medical Centre in Owo after contracting the dreaded virus.