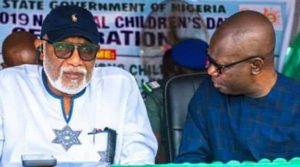 The outgoing Deputy Governor of Ondo State, Agboola Ajayi, has said his tenure with Governor Rotimi Akeredolu was full of political intrigues.

Naija News reports that Ajayi’s tenure as Deputy Governor will expire today while Akeredolu will be sworn-in for a second term alongside his new Deputy, Lucky Ayedatiwa.

Recall that Ajayi had fallen out with Akeredolu which led to the deputy governor leaving the All Progressives Congress (APC) and contesting and lose the governorship election on the platform of the Zenith Labour Party (ZLP).

There was also a failed attempt to impeach Ajayi as nine lawmakers of the Ondo State House of Assembly refused to support the action of their colleagues, a move the Chief Judge of state did not also approve.

In a farewell message as he bows out on Wednesday, Agboola Ajayi thanked God for unfailing grace and the tenacity of the Ondo State Judiciary.

He stated that the Ondo State Judiciary was adhesive to the spirit and letter of the constitution.

Ajayi said: “My profound appreciation also goes to the nine Honourable Members of the Ondo State House of Assembly, who are code-named the Integrity Group, stood on principle of rule law and truly upheld the integrity of the legislature and against all odds (including facing physical harm and political intimidation), like the Rock of Gibraltar against executive recklessness. I’m happy today that through our little efforts, democratic institutions in Ondo State and in Nigeria have been strengthened.

“I’m most grateful to the people of Ondo State, who gave me the mandate to serve them as deputy governor. I also appreciate them for acknowledging and supporting my potential to provide a credible alternative towards providing deliverable services to the people without selfish profiteering.

“I humbly urge Christians, Muslims and all well-meaning Nigerians to continue to pray for the peace and progress of Ondo and Nigeria.