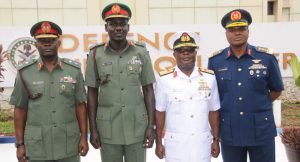 Nigeria’s immediate past Service Chiefs have explained a single mistake they have all been making while dealing with insecurity issues in the country.

Appearing before the Senate Committee on Foreign Affairs on Thursday, February 18 for their screening as non-career ambassadorial nominees, the ex-service chiefs said its mistakes over time was that only the military can solve insecurity in the country.

According to the former Chief of Defence Staff, General Abayomi Gabriel Olonisakin (rtd), insecurity issues in Nigeria can only be overcome if the nations’ political, social, economic aspects are addressed.

Naija News understands that the ex-service nominees were united in their lamentations over the spate of insecurity in the country. Olonisakin attributed the problem to the over 1,000 forest reserves in the country not well managed and secured by respective state governments.

He said: “I want to say that the solution to insecurity is multi-pronged. We talk about conventional warfare and asymmetric warfare. We are talking about hybrid warfare where everyone is involved.

“It is not about kinetics. Kinetics gives only 35 per cent success rate in any war we are fighting. It is a national approach that must be properly galvanized for us to actually surmount the insecurity.

“I will say three years ago, I conducted a research on the forests in the country. I realized we have over 1,000 forest reserves. I sent the team to Kenya. They went to Kenya and brought out a paper and I said then, three years ago that our next crisis will be in the forest.

“We did the research in 2018 for six months. I said that the next problem we are going to have is in the forests. But again, it is with us right now. It requires a multifaceted approach.

“Everyone has to come on board for us to be able to address the insecurity situation. You can never have enough weapons, personnel and so on but there are issues we must address and then it has to be all about the nation”.

Meanwhile, Tukur Yusuf Buratai while reacting to the spate of insecurity in the country earlier, Buratai while facing the committee reiterated that it may take the country 20 years to eliminate Boko Haram Insurgency.

He said: “My state (Borno), is an epicentre, where this indoctrination has penetrated so deep. They (insurgents) have won the communities to their side. That is why they (communities) keep Boko Haram. So it is complex, it requires a whole of government approach to solving this, military action or activity is just one aspect.

“Yesterday, I counted five local government areas in Borno State that do not have good access roads.

“In the Northwest, north-central, there are so many ungovernable spaces, which the insurgents are penetrating. The places don’t have schools, hospitals and so on and education is very fundamental.

“Unless these things are done, this insecurity will continue because the truth must be told. It may take another 20 years for the country to surmount the problem of Insurgency and that is the truth.”