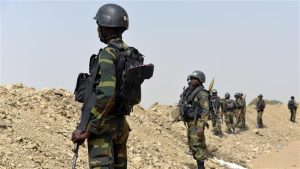 The Nigerian Military has reportedly arrested 20 members of the proscribed Indigenous People of Biafra (IPOB) after its operation in Orlu, Imo State.

Recall that the military had last Thursday launched a land and air operations against operatives of Eastern Security Network (ESN) believed to be in the forests in Orlu and its environs.

He said the group, hiding under the pretext of chasing out Fulani herdsmen from the area plan to cause havoc in the community but he moved against them by bringing in the soldiers to maintain peace and secure the area.

On Monday, a top military intelligence officer told PRNigeria that IPOB members allegedly ambushed and killed the six soldiers who were on the escort of the Director Civil Affairs, Brigadier General HE Nzan and his team on inspection of Civil-Military Project at Nkwerre.

The source said “Since the beginning of the year, the activities of IPOB militias through its untenable and unreasonable demand for secession, has adversely affected the security situation in the area.

“The activities of the threat elements have led to an increase in organized crimes such as armed robbery, car snatching, kidnapping, raping and sundry violent criminal acts. “There have been attacks on civilians, police and military personnel on checkpoints and escort duty.

“Recall that troops of 34 Brigade in conjunction with the Imo State Police Command, on Friday 22 January 2021, carried out raids in Okporo/Ezenta and Akata axis of Orlu Local Government Area to recover the corpse of a police officer killed by IPOB elements. “During the raids, one IPOB member was killed and a vehicle (Jeep) was recovered. Various IPOB training camps were also discovered and destroyed.”

The suspects arrested and items recovered were handed over to the Police Headquarters Owerri for prosecution.