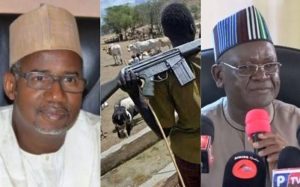 The Peoples Democratic Party (PDP) has revealed that steps have been taken to reconcile Benue State Governor, Samuel Ortom and his Bauchi State counterpart, Bala Mohammed who have been at loggerheads in recent times.

It will be recalled the two governors, both elected on the platform of the PDP have publicly disagreed on the use of guns by herdsmen and how the activities of herdsmen generally out to be managed in the country.

In the latest development on the public exchanges between the two PDP governors, Governor Ortom has said Governor Mohammed of Bauchi is a member of the Fulani terrorists terrorizing Nigeria.

Recall that Mohammed had slammed the Benue governor accusing him of creating bad media campaign against the Fulani ethnic stock.

He also said Ortom has criminalized the entire Fulani ethnic stock across the country.

Reacting in a press conference in Makurdi on Monday, Ortom said, “Since he (Mohammed) has chosen to vilify and intimidate me. I am compelled to think that he is one of the Fulani terrorists terrorizing this country.

“Why did I say so? This is the same governor who took an oath of office to protect the constitution of the Federal Republic of Nigeria.

He also directed Fulani herdsmen to carry their AK-47 rifles and relocate to Bauchi if they won’t obey laws in his state.

The Benue governor urged herdsmen to respect the laws on the illegality of bearing unlicensed arms.

According to Ortom, it is illegal and unconstitutional for any individual, no matter the tribe to carry arms without approval from security agencies.

Reacting to the rift between the two governors, the PDP in a statement on Monday night, called for calm and urged the federal government as well to urgently address the issues of insecurity in the country.

The party noted that its internal control mechanism will address the rift between the two governors.

The statement reads: “PDP assures that it has waded into the rift between Bauchi State Governor, Senator Bala Mohammed, and his Benue State counterpart, Governor Samuel Ortom.

The PDP calls for calm as the internal reconciliation mechanism introduced by the hierarchy of the party between the two governors subsists.

The PDP however, urges the Federal Government to take urgent steps to address the escalated security challenges in our country.”

Speaking while featuring on Channels Television’s Politics Today programme, Sheikh Gumi said: “They (bandits) are not Boko Haram but we have to be very careful, if the pressure is too much, they can be influenced by Boko Haram.”

On why the Nigerian military can’t locate bandits, the clergyman said security forces were aware of the whereabouts of bandits who have been involved in high-scale kidnappings in Kankara and Kagara as well as serial killings in different parts of the country.

He said the military has refused to attack them because they were re-evaluating their strategies having realized that neutralizing the bandits through force only creates more monsters.