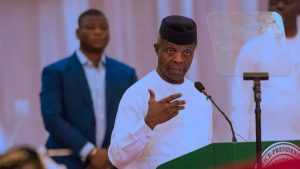 Vice President of Nigeria, Prof Yemi Osinbajo, has given clarification on how the National Social Investment Programme funds were handled while he was chairing the scheme.

According to Osinbajo the NSIP under his supervision received an endorsement from quite a number of local and international bodies including the Africa Development Bank, World Bank and the World Economic Forum.

The VP explained further that the NSIP funds as at 2016 to 2019 were not handled by him but by the Ministry of Budget and National Planning. Naija News understands that Osinbajo’s submission was coming following reports that the National Assembly was concluding plans to probe the activities of NSIP under VP and Maryam Uwais, Special Adviser to the President on the NSIP.

Reports had it that the probe was targeted at diverting attention from the series of corrupt activities uncovered under Minister of Humanitarian Affairs and Disaster Management, Sadiya Umar Farouq.

Osinbajo reiterates that the scheme under his supervision was applauded for its impact on millions of beneficiaries across the states.

The statement from the VP’s office reads; “Osinbajo insisted since 2016 that a full-fledged ministry should undertake everything about financing the programme.”

“Since its implementation in 2016 until October 2019, the SIPs was domiciled in the Office of the Vice President, with VP Yemi Osinbajo, SAN, as Chair of the Steering Committee that oversees the National Social Investment Office (NSIO).

“The NSIO provides standard delivery mechanisms, with objectivity, collaboration, synergy transparency, efficiency and pro-active monitoring in mind. To assure of close collaboration and impact, focal persons from each State were nominated by the Governors, to supervise the State’s activities in relation to each of the four programmes.

“The Office of the Vice President WAS NOT involved in financial transactions or the disbursement of funds for the SIPs. The Ministry of Budget and National Planning was in charge of all matters regarding financing, budgeting, procurement and disbursement of funds allocated and released for the N-SIPs.”

Osinbajo again noted that the NSIO Steering Committee supervised the implementation of the SIPs under the OVP.

Naija News understands that the steering committee comprises nine ministers including that of Finance; Education; Health; Agriculture, Trade and Investment, Youth and Sports, Women Affairs; Labour and Productivity; Information; with the Ministry of Budget and National Planning as the Secretariat.

Meanwhile, a political activist and former Deputy National Publicity Secretary of the All Progressives Congress (APC), Comrade Timi Frank, has called on President  Muhammadu Buhari, to set up an investigative panel of inquiry to investigate the illegal withdrawal of N10billion from the Treasury Single Account which involved the Vice President, Yemi Osinbajo.