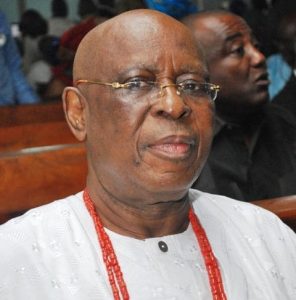 Olusegun Osoba, a former governor of Ogun State, has reportedly been appointedHeadline Chairman of the Governing Council of the Nigerian Institue of Journalism.

A source told The Punch that Osoba, a chieftain of the All Progressives Congress (APC), was appointed on Tuesday.

It was gathered that Osoba was introduced by the Publisher of Vanguard Newspaper, Sam Amuka at a meeting.

President of the Newspapers Proprietors Association of Nigeria, Mr Nduka Obaigbena, was also at the meeting.

Osoba is a journalist and politician.

Naija News recalls that the newly built Nigerian Institute of Journalism (NIJ) house in Lagos was named after Isa Funtua.

The Newspapers’ Proprietors Association of Nigeria (NPAN), Nigeria Guild of Editors (NGE) and the Nigerian Union of Journalists (NUJ) named the complex after him.

Isa Funtua was a life patron of NPAN.