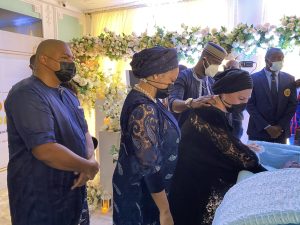 Peter Okoye of the defunct P-Square singing group on Thursday, February 25 mourn again as he laid to rest his father-in-law, Chief Oladipo Adewale Omotayo aka “Papa

Naija News reports that the singer disclosed the demise of his wife’s father on Wednesday, December 16 on his Twitter account. Okoye had hinted earlier on the micro-blogging platform that he lost someone after he shared an image with the caption ‘RIP Papa”.

He tweeted: “My dear father-in-law. Chief Oladipo Adewale Omotayo aka “Papa”
We will surely miss you!

“Your beloved Daughter Lola Okoye and your grandchildren Cameron & Aliona Okoye misses you desperately and even more!”

See photos from the event below:

Meanwhile, a few days ago, Nigerian singer and member of the defunct hip-hop group Plantashun Boyz, Chibuzor Oji, better known as Faze announced the death of his twin sister.

Naija News reports that the 44-year-old musician announced in a post on his Instagram account on Monday that he lost his twin sister just 48 hours to their birthday.