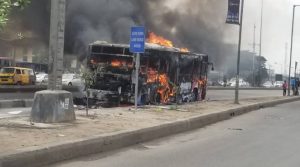 Not less than 45 passengers escaped death on Monday when a Bus Rapid Transit (BRT) vehicle conveying them suddenly caught fire in Lagos State.

The incident happened close to Anthony Bus stop according to information made available to Naija News.

All passengers on board were however able to escape to safety but some sustained varying degrees of injury while trying to escape.

He said the incident happened around 11am while the bus was conveying passengers to the TBS Terminal.

According to the official, the bus which went up in flames was brought in to convey passengers to their destination after the initial bus they boarded from the Ikorodu Terminal broke down.

Emergency responders including NEMA officials, police operatives as well as the fire service have been drafted to the scene.

Meanwhile, One Abu Adams, 26, has been arraigned before an Ikeja Chief Magistrate Court for allegedly stealing high-end phones worth about twelve million naira.

It was reported that the suspect stole 165 pieces of the Samsung brand from a phone hub belonging to one Nelson Nigeria Ltd in Ikeja. Naija News understands that Adams committed the crime on January 16 this year.

The accused while appearing before the court on Monday pleaded guilty to the charges of theft against him which is punishable under Section 287 of the Criminal Law of Lagos State, 2015.

The Prosecutor, ASP Benson Emuerhi, during the court session said Adams committed the offence on January 16 at 7:00 am., at Isaac John Street GRA, Ikeja. He revealed that “the defendant stole 165 Samsung phones, valued at N11.6 million, belonging to Nelson Nigeria Ltd.

“Adams entered the shop and stole the items from where they were kept,” Emuerhi noted.

In his ruling, the Chief Magistrate, J. A. Adegun, granted Adams bail in the sum of N500,000, with two sureties in like sum. He, thereafter, adjourned the case until March 1 for further hearing.