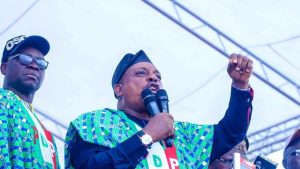 Sources have revealed that some members of the Peoples Democratic Party (PDP) National Working Committee (NWC) are plotting to remove and replace Prince Uche Secondus as the party’s national chairman ahead of the 2023 general elections.

The source says the members do not trust his ability to lead the party to victory in 2023 and are also displeased with the way issues within the party are being handled under his leadership.

They also brought issues of alleged financial mismanagement of party funds against Secondus, adding that the party has not been able to capitalize on the mistakes of the ruling All Progressives Congress (APC) to attract more Nigerians to itself.

“Many of the NWC members are unhappy with him (Secondus). He has not lived up to expectations. And we’re afraid that our great party would not make the expected impact in 2023 if we retain Secondus as national chairman”, the source who did not want to be named told The Nation.

“There were also allegations of financial mismanagement brought against him. And we needed explanations, which we are yet to receive. There was so much tension, and it was clear many stakeholders in the party wanted Secondus out.

“He has been unable to manage the simmering crisis in the party, some chapters in the north are barely hanging on by a thread. Even in the south west, some prominent members are at war with each other, and the only reason the party has not imploded there is because of their strong faith in the party.

“Secondus has also failed to manage the situation. We think he just has to leave so we can reposition the party for 2023,” the source added.

He further revealed that on Tuesday, during the NWC meeting, there were heated debates by members of the need to replace Secondus as party chairman.

The tension-soaked meeting however was inconclusive but officials tried to calm flaring tempers of the members.

Other members of the committee include one-time Senate President, Anyim Pius Anyim, and ex-governor of Cross River State Liyel Imoke as members.

Speaking to newsmen after the meeting, Saraki said the committee sought Jonathan’s counsel on how to go about strengthening the party, by reconciling aggrieved members.