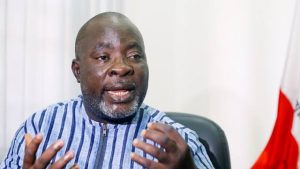 The Peoples Democratic Party, PDP have reacted following Ibrahim Magu’s declaration that he would be reinstated as the  Chairman of the Economic And Financial Crimes Commission.

Through its spokesman, Kola Ologbondiyan, the PDP described Magu’s remark as a huge challenge on the integrity of the Presidential committee probing his alleged corrupt practice while in office.

According to a statement by Ologbondiyan, reinstating Magu shows that the investigating panel and President Muhammadu Buhari’s government have compromised standards.

It said “Nigerians are unease that such assertive statement by Magu’s lawyer holds more than meet the eyes and portrays the Presidential Panel as well as the Buhari Presidency as having compromised the probe.

He noted that Nigerians were shocked when counsel to suspended EFCC acting Chairman, Wahab Shittu, boastfully declared that he has Magu’s instruction to inform the public that “he will be reinstated back to office.

He noted that this declaration had heightened fear that his arrest an probe was a scam and would soon be swept under the carpet.