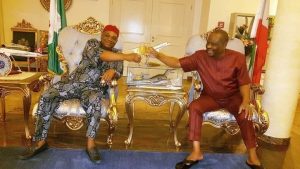 Chief Whip of the Senate and former Governor of Abia State, Senator Orji Uzor Kalu, has urged Governor Nyesom Wike to dump the Peoples Democratic Party (PDP) for the All Progressives Congress (APC).

He stated this on Thursday while speaking to newsmen after inspecting the; Rumuokoro Flyover bridge, 2nd Artillery flyover bridge, Real Madrid Football Academy and the Mother and Child Hospital, Rumuomasi in Port-Harcourt.

Senator Orji Kalu urged Wike to join the APC in order to consolidate on the rewards of belonging to the party at the centre.

He said: “I encourage and appeal to other Governors to emulate Governor Wike in terms of his infrastructural drive in the state because this is what democracy is all about which is making the people happy by meeting up with their expectations.

“You see how visibly happy the people were when they sighted the Governor, I am impressed by the quality and quantity of infrastructures I have seen so far.

“The Governor has confirmed that there are about five flyovers in construction and three more have been approved for construction.”

The former Abia governor pleaded with Governor Wike to reduce his continuous criticisms of the APC while asking him to instead work with the APC-led Federal Government.

“I urge the Governor to partner with the APC, I discussed with him all through the night to find a common ground with the APC, I believe that very soon it shall come to reality,” he said.

“I commend him for the tour; he is a man needed by us in the APC, it is my belief that a messiah can come from anywhere. So I urge Governor Wike to soft pedal on our party, humans can switch from one party to another which is human behavior in Africa.

“I appeal to him to partner with us so that the good people of Rivers can benefit more from the Federal Government of Nigeria.”