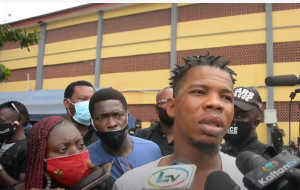 A middle-aged Lagos based Nigerian man who was arrested for arm robbery and cases of rape has demanded that he should be killed.

Naija News understands that the young man who gave his name as Adeniyi Ajayi had explained to The PUNCH in a recent interview why he deserved to be killed and not spared to live again.

The arrested armed robber and a rapist requested of the police officers to ‘waste’ his life, noting that he had committed series of crimes such as breaking into homes to rob and as well sometimes rape his female victims in their homes after robbing them.

However, Ajayi in his confession noted that he had only raped three women in his operations against the claims that he has raped 30 women.

He revealed his rape victims as two housewives and another a house help. According to Ajayi, his criminal acts became worst after he was released from prison the first time he stole a phone. He stated further that some other prisoners had asked him to join their gang when he is released.

The rapist explained further that he tried to make a decent living when he was first released but that no one showed interest in supporting him, so he decided to go back to a life of crime and started carrying guns.

Ajayi demanded of the security operatives to waste, i.e ‘kill him’ because he doesn’t want to become a bigger problem for the nation, adding that he is sure he would become even worse when he returns from prison.

Watch Ajayi explaining his experience and why he wanted to be killed in the video below;

Meanwhile, a young Nigerian lady has been arrested in Ekiti State for allegedly tearing off the uniform of a Police Sergeant in the state.