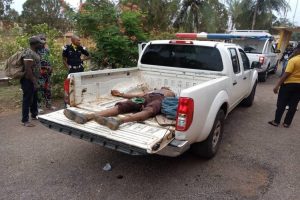 The Ogun State police command, has killed wanted serial killer in the state, Feyisola Dosunmu, popularly known as Spartan at his hideout in Iperu.

The 28-year-old was declared wanted by the state police command after killing more than seven persons at different locations.

Recall that the serial killer murdered a 53-year-old said to be the Vice-Chairman of the Oluwatedo Community Development Association.

‘Spartan’ was alleged to be a notorio@us cultists and drug addict who macheted a nursing mother to death at Ogere before killing a security guard attached to one poultry farms at Iperu Remo, Ogun State.

The Police Public Relations Officer in Ogun State, Abimbola Oyeyemi confirmed that he was killed at his hideout in Iperu during a raid by the Police and he was attempting to kill anybody on sight with his cutlass.

While reacting to the development, governor Dapo Abiodun said “this is the end for him (Feyisola Dosunmu popularly known as Spartan}.”