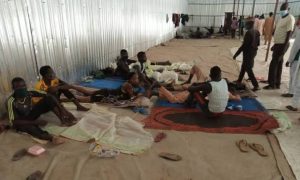 About one hundred and twenty-six farmworkers reportedly held hostage in Kano State rice factory for months has regained freedom.

The rescue was made by men of the state Police command following complaints at the force headquarters by the Global Community for Human Rights Network in the state, Naija News understands.

Confirming the report, Public Relations Officer of the state police command, Abdullahi Haruna revealed that a team of policemen were deployed to the popular Farms and Mills Limited located in Challawa Industrial Estate in Kano, following series of complaint received by the command and were able to free 126 workers held hostage for three months.

He said, “On receiving the information a team of policemen was deployed and when a search was conducted, 126 labourers trapped inside the factory for three months were rescued,”

Haruna disclosed that four officials of the factory have been apprehended and that investigation has commenced to further unveil hidden facts of the incident.

“The workers reportedly said they were denied exit from the mill since the beginning of the nationwide lockdown imposed in March for fear of importing COVID-19 into the factory,” Haruna revealed.

“They said they were promised an increase in their monthly salary, and that those who did not accept were threatened with dismissal. The workers alleged that they were forced to work in poor condition during their lock-up.

“We were treated like slaves for three months,” said one of the rescued workers.

He added, “We were all set free on Monday. It was a nasty experience…I don’t know how to describe the food we were fed with. The head of the administration recruited one woman who was cooking the food for us to buy.

“My monthly salary was N32,000. We were working day and night. I wanted to leave but there was no way; my wife and children were traumatized.”

On his part, Karibu Kabara, a member of the human rights network while reacting to the incident disclosed that his organisation was taking up the case to ensure that the men got justice.

“What I saw was heartbreaking. Where the company kept these people to live isn’t fit for animals. Their meals weren’t enough and there were no drugs for those that took ill,” he said.

Meanwhile, President Muhammadu Buhari has boasted that Nigerian security agencies are capable of curbing insecurity issues in the country.