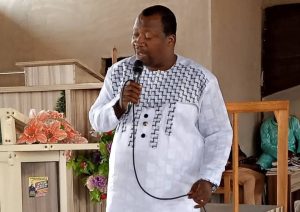 A note of caution has been sounded to Governor Rotimi Akeredolu about his deputy, Agboola Ajayi in the race to the 2020 governorship election in Ondo State.

The renowned prophet, however, added that Ajayi will not be winning the October 10 governorship election in the state.

Prophet Bmigboye made his submissions during the church service on Sunday where he warned Akeredolu to quickly mend fences with his embattled deputy governor to avoid regrets.

According to the prophet, divine arrangements favour Eyitayo Jegede of the Peoples Democratic Party (PDP) but he needs to be careful and prayerful to avoid being robbed of his electoral victory and losing to Akeredolu.

In his words ”Let me make it clear that when God reveals to do something, the person concerned must be ready and willing to work for the realization of that thing , to come to pass if not it may skip off from him because as there is divine arrangement there is also some wicked forces arrangement

“It is just like if God tells a barren woman that in nine months time you will carry a baby, and the woman carried away with joy go about celebrating without going to sleep with the husband, then the prophecy may not come to pass, so Jegede must pray and work hard if not Akeredolu may be the beneficiary of the prediction.”

”And I am warning again that the ruling party will use money and might to ensure Akeredolu wins in the election, but PDP and the electorate must be resolute by praying very hard and observant to allow their votes count.’

The popular prophet also predicted victory for Pastor Ize Iyamu of the APC in the September 19 governorship election in Edo State.

He added that Governor Godwin Obaseki will be outmaneuvered in every step and warned him not to resort to violence.

He also cautioned Adams Oshiomhole to ray seriously against sickness after the Edo election.