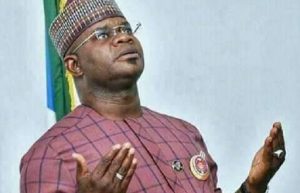 A group of prayer warriors stormed the office of Kogi State Governor Alhaji Yahaya Bello in Lokoja on Tuesday to pray for him and his 2023 presidential ambition.

Naija News reports that the group known as the Kingdom of Father’s and Mother’s Global College of Bishops and Clergies Network international was led by Archbishop Dr. Peter Ogareki.

Addressing the group, the Kogi governor said all Security challenges, infrastructural decay and disunity which he claimed were inherited on assumption of office in 2016 have been addressed headlong.

He lamented that the country was divided along religions, ethnic and other divisive tendencies before the APC government took over the leadership of the country in 2015.

Yahaya Bello praised President Muhammadu Buhari for his handling of the nation, saying “We have been able to ensure a more united, prosperous, secured and more progressive Kogi State under my administration.

On the 2023 presidency, Bello noted that there has been pressure on him to run for the presidency, but however said the issue of the next president of Nigeria is in the hand’s of God.

“God is going to show us the way to follow in the days ahead. We prayed that God will give us a good leader in 2023, who will build on the legacy of president Muhammadu Buhari,” he said.

The group commended Yahaya Bello’s leadership style and praised him for his approach to the Coronavirus pandemic.

They offered prayers for the Governor and the State and keyed into the Governors 2023 plans.

The group promised to support the Governor in prayers for the 2023 presidency, saying that the country required a focused, determined, result-oriented and detribalised leader in 2023.