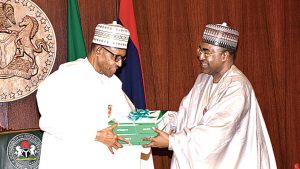 The appointment of former Lagos State military administrator, Brig-Gen. Mohammed Buba Marwa (retd) as the Chairman of the National Drug Law Enforcement Agency (NDLEA) has been confirmed by the presidency.

The Senior Special Assistant to the President (Media & Publicity), Garba Shehu confirmed Marwa’s appointment in a text message in response to the inquiry by Nigerian Tribune.

It will be recalled Naija News previously reported that President Muhammadu Buhari on Friday approved the appointment of Brigadier General Mohammed Buba Marwa (rtd) as the New Chairman of the National Drug Law Enforcement Agency(NDLEA).

Marwa, a former military administrator of Lagos State was until this appointment, the Chairman of the Presidential Committee on Drug Abuse.

He previously served as the military attaché, Nigerian Embassy, Washington DC, USA, and defence attaché, United Nations, New York, as well as former Nigerian ambassador to South Africa and the Kingdoms of Lesotho and Swaziland.

The appointment is with immediate effect.

Meanwhile, the pan-Northern socio-political organization, Arewa Consultative Forum, says it will not object to a southerner succeeding President Muhammadu Buhari in 2023.

Speaking to The Punch on Saturday, ACF National Publicity Secretary, Emmanuel Yawe, said the forum will not interfere in a matter that has been reserved for political parties to handle by the 1999 Constitution.

He noted that the forum will also not support a particular zone or a particular candidate for the presidency or any other office.