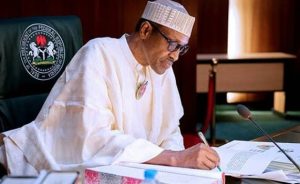 The President of Nigeria, Muhammadu Buhari has approved the appointment of Mallam Abubakar Nuhu Fikpo as the Acting Director-General of the National Directorate of Employment, NDE.

The approval was contained in a letter to the Minister of State, Labour and Employment, Festus Keyamo, (SAN), dated Monday 18, 2021.

The President’s official spokesperson, Mallam Garba Shehu confirmed the development to newsmen in a statement from his Twitter account on Monday.

The statement reads: “President Muhammadu Buhari has formally conveyed to the Minister of State, Labour and Employment, Mr. Festus Keyamo, SAN, his approval of the nomination of Mallam Abubakar Nuhu Fikpo as the Acting Director-General of the National Directorate of Employment pending the appointment of a substantive Director-General for the Agency.”

It will be recalled Festus Keyamo had previously based on a directive from the President, appointed Mallam Fikpo as the acting Director-General of the National Directorate of Employment (NDE).

Keyamo directed Fikpo to take over the administration of the agency from Monday, 7th December 2020 in acting capacity pending ratification by President Muhammadu Buhari.

This came after Buhari had relieved the erstwhile Director-General, National Directorate of Employment (NDE), Dr Nasiru Mohammed Ladan Argungu, of his appointment.

This was made known in a statement on Tuesday by the Senior Special Assistant to the President on Media and Publicity, Mallam Garba Shehu.

The statement disclosed that Buhari also directed the Minister of State for Labour and Employment, Festus Keyamo (SAN), to appoint an Acting Director-General from the senior directors of the agency to replace Argungu.

Meanwhile, President Muhammadu Buhari has approved the posting of new envoys to various Nigerian Embassies and missions across the world.

In a list sighted by The Punch, about 11 ambassadors were re-appointed but eight were retained in their current countries of posting while three others were redeployed.