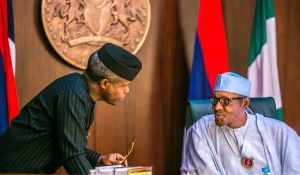 Reports have emerged of Vice President Yemi Osinbajo kicking against the re-appointment of Chiedu Ugbo as the managing director of the Niger Delta Power Holding Company (NDPHC) by President Muhammadu Buhari.

Naija News gathered that Osinbajo had in August 2016 recommended the appointment of Ugbo.

However, when Buhari sought Osinbajo’s opinion on the position ahead of the expiration of Ugbo’s tenure, his name was not on the vice-president’s shortlist, TheCable reports.

A statement by Mr. Laolu Akande, Senior Special Assistant to the President on Media and Publicity, Office of the Vice President, noted that:

“President Muhammadu Buhari has approved the renewal of the appointment of Mr Joseph Chiedu Ugbo as the Managing Director of Niger Delta Power Holding Company and Messrs Babayo Shehu and Ifeoluwa Oyedele as Executive Directors respectively.

“The appointment of three (3) additional directors have also been approved for more effective and efficient coverage of the company’s areas of activity,”

TheCable reports that In a letter dated October 29, 2019 and addressed to Buhari, Osinbajo had asked him to consider James Olotu, pioneer managing director of NDPHC, as Ugbo’s replacement.

In the memo titled “Appointment of the new managing director of Niger Delta Power Holding Company (NDPHC)”, the vice-president listed six names for the post.

“This memorandum is in response to your directive through the Chief of Staff letter dated 11th October, 2019. In the letter, you directed a review of the current management team of NDPHC, to professionalise it,” Osinbajo wrote.

“Your Excellency, to give effect to your directive, I was able to obtain six (6) professionals who have undoubted and unquestionable reputations to be selected for the post of the Managing Director of NDPHC. They are:

“Your Excellency, I instituted a five-man team to study their CVs carefully and produce their respective brief to me. It is important to mention here that none of my staff were among the five man team. They were all outsiders who have the knowledge of power project management.

“Besides, I did not allow them to make any recommendation or choose the best among them. I did so for the sake of transparency and also to make sure that the recommendation to Your Excellency is completely from me and is the best.”

Among the six nominees, the vice-president noted that only two — Olotu and Bukar — attracted his attention.

However, Osinbajo stated that Bukar has no experience in power sector development and management.

The vice-president added that 71-year-old Bukar will not be very active to absorb the pressure and stress of the job because of his age.

“Mr. President, judging from the above, Mr. James Abiodun Olotu is the best candidate for the post of the Managing Director of NDPHC,” the vice-president wrote.

“His educational qualifications, experiences and courses he attended stand him out as the best among the six (6) nominees. He is vibrant, honest and very accessible who believes in teamwork. He is trusted and incorruptible.

“I have no doubt that if given the opportunity once more, he will excel to the admiration of Nigerians. I have no hesitation therefore in recommending him for the job.

“Accordingly, Your Excellency is hereby requested to approve the appointment of Mr. James Abiodun Olotu as the new Managing Director and Chief Executive Officer of the Niger Delta Power Holding Company (NDPHC).”

Buhari, however, did not follow the recommendation of the vice-president.