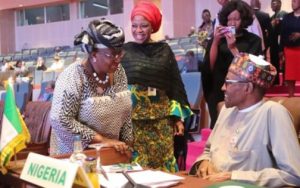 President Muhammadu Buhari has congratulated Ngozi Okonjo-Iweala on her emergence as the Director-General of the World Trade Organization (WTO).

The President in a statement on Monday by his senior special assistant on media and publicity, Garba Shehu said her emergence has brought joy and more honour to Nigeria as a country.

It will be recalled as earlier reported by Naija News that Ngozi Okonjo-Iweala was officially declared on Monday as the first female and first African leader of the World Trade Organisation.

BREAKING: Ngozi Okonjo-Iweala from Nigeria is appointed as the next WTO Director-General.

Dr. Okonjo-Iweala makes history as the first woman and the first African to lead the WTO.

Reacting to the development, President Buhari congratulated her and urged her to use her new position to serve humankind just as she’s been doing in the past.

He wished her well in the new endeavour.

The statement reads: “On behalf of the Federal Government and all Nigerians, President Muhammadu Buhari warmly felicitates with former Minister of Finance and Economy, Dr Ngozi Okonjo-Iweala on her election as Director General of the World Trade Organisation, bringing joy and more honour to the country.

As the Harvard-educated and renowned economist takes up another onerous task of service to the world and humanity, the President believes her track record of integrity, diligence and passion for development will continue to yield positive results and rewards to mankind.

President Buhari affirms that Dr Okonjo-Iweala, who over the years set major records of economic reforms in Nigeria as Minister of Finance, and later Minister of Foreign Affairs, will excel in her new position and validate the global mandate of repositioning and strengthening the multilateral institution for the greater good of all.

The President joins family, friends and colleagues in wishing Dr Okonjo-Iweala well in her new endeavour.

Meanwhile, authorities in Liberia, Mali, Senegal, Sierra Leone, Ivory Coast, and Guinea-Bissau are warning of an Ebola outbreak after three people died as a result of the disease in neighboring Guinea.

The Democratic Republic of Congo is currently experiencing the 12th outbreak of the disease. Four cases have been reported in the east of the country so far.