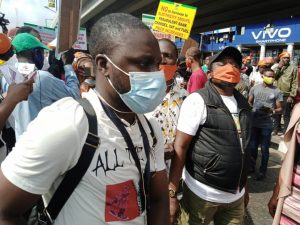 Civil society groups, students and workers in Ibadan, Oyo State, have taken to the streets to protest against the increase in the price of petrol and electricity tariff.

Naija News recalls that the Federal Government last Wednesday through the Petroleum Pricing Marketing Company (PPMC) increased the ex-depot price of petrol from N138 to NN151.56 per litre, triggering marketers to increase pump price from N148 to N162 per litre.

Similarly, the Nigerian Electricity Regulatory Commission (NERC) had approved an increase in electricity tariff with effect from September 1, 2020.

A NERC document showed that electricity customers, except those receiving less than 12 hours of supply, would have to pay more for electricity starting from September 1, 2020.

Angered by the various increase, the protesters took to the streets while carrying different placards with inscriptions to convey their disapproval, while chanting anti-government songs.

The protesters who gathered at the Awolowo Junction area of the state capital. condemned the policies of the regime of President Muhammadu Buhari.

Speaking to The Punch, Chairman, Joint Campus Committee of the National Association of Nigerian Students, Mayowa Opakunle, said, “We are out on the streets to register our grievances and show our displeasure at the wicked policies and unjust treatment of Nigerians by the Federal Government.

“We say no to fuel price hike and electricity tariff increment at this period when many people have lost their jobs, many have not even been paid salaries for the past six months.

“Prices of food, other goods and services have continued to increase while salaries are either being slashed into half for so many while others don’t even get at all.

“But despite these hardships, the government has continued to increase prices of commodities. The consistent show of ineptitude and cluelessness on the part of the President and his cabinet is worrisome.”