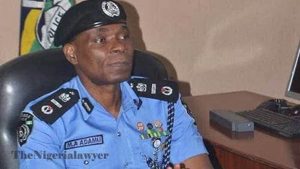 The Inspector-General of Police, IGP Mohammed Adamu, has issued an order of scrutiny on alleged rape against renowned Nigerian singer and songwriter, Oladapo Oyebanjo better known as D’Banj.

It could be recalled that the music icon a few days ago frowned at his accuser, Seyitan Babatayo, requesting her to pay him the sum of hundred million naira within speculated hours else face legal action.

However, a letter addressed to the Deputy Inspector General of Police, CID department in Abuja yesterday by the IGP through his Principal Staff Officer, Idowu Omohuwa, requested a thorough investigation into the alleged act levelled against Oyebanjo.

Part of the letter with the reference number; CB.7000/IGP.SEC/ABJ/VOl.484/801, titled Re: Petition Against (1) Oladapo Daniel Oyebanjo (Aka D’Banj) for Rape Indecent Sexual Assault, Attempted Assault on Miss Seyitan Temidayo reads: “I forward herewith copy of the letter dated June 5, 2020, received from Ojoge, Omileye and Partners on the above-underlined subject. I am to respectfully convey the directive of the Inspector-General of Police that you treat.

“Accept the assurances of my esteemed regards please,” it added.

Naija News understands that the IG’s letter was to address a petition forwarded to his desk by one Mr Tommy Ojoge-Daniel, a counsel to Miss Seyitan Babatayo, who accused D’Banj of raping her in 2018.

According to reports from Seyitan’s ally, Benjamin Ese who took to his social media account to disclose the allegation, D’banj had in 2018 assaulted Seyitan at a hotel in Lagos.

In another development, Naija News had reported that Yobe State Command of the Nigeria Police Force (NPF) has apprehended a wood seller in the state for allegedly luring a 10-year-old girl to his room and raped her.