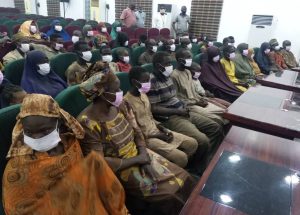 Some of the persons who recently regained freedom after they were abducted by kidnappers in Niger State have shared their harrowing experiences while in the kidnappers’ den.

It will be recalled as previously reported by Naija News that abductors on Sunday released all victims kidnapped from the Niger State Transport Authority (NSTA) bus.

One of them identified as Hajiya Jumai Isa, narrated that they were terribly beaten and made to trek for over twenty-four hours amidst fears of getting killed.

According to her, the kidnappers demanded money and threatened that they won’t be released except ransom was paid for them.

Isa described the experience as a terrible one, adding that she had given up all hope of coming out alive.

She added that they were served food on their hands accompanied by dirty water, but they had no choice but to eat it like that.

“It was a terrible experience but we thank God that we are safe now. It was not easy. They have been threatening us, they beat the men- they really beat the hell out of the men. They told us they didn’t want anything from us but money. They said they want money, that we should give them money, that our people should bring money for them so that they will free us and that if not, they will kill us,” she told The Nation.

Isa narrated that the bandits carried sophisticated weapons which she hadn’t seen in real life before except in movies, adding that she was however grateful to have survived the ordeal and reunite with family members and loved ones.

“Their weapons, I have never seen the type before in real life. They have rockets, guns, AK 47, and other weapons. The bandits were more than 1000 in that bush.”

“I feel happy being reunited with my family. I thank God I am still alive because I had lost hope, I didn’t think I will come back again.”

Another released victim, Mohammed Ndagi narrated that he was returning from his friend’s wedding in Rijau when they were kidnapped.

He explained that one of the bullets from the bandits’ sporadic shooting scrapped his head, which made him start bleeding but he was still forced to walk several hours without treatment.

He said they drank the same water that cows drink and were made to sleep on the bare floor with guns pointed at them all the time.

She also corroborated the claim of the first victim that all they demanded from them was money.

“One of the bullets swept my head. When I saw blood, I thought I wouldn’t survive. But even with the wound, they forced me to move with them into the bush. We walked for about 24 hours. We walked all through the night. They gave us simple food. We drank the water that cows drink.”

“We slept on the bare floor. They did not tie our hands or tie us at all. They kept guns to our head and beat us all the time. There is one among them that didn’t care if there is a man or a woman, he beats us. They beat us with stick. As they beat us, they kept saying, we need money or we will die here. They are all Fulani. When they want to speak to us, they speak Hausa and when they want to speak to themselves, they speak Fulani,” he added.

Ndagi said their kidnappers however begged for forgiveness on the day they were released and had to escort them to where they were handed over to those who negotiated their release in order to prevent another group of bandits from kidnapping them.

“On the day they released us, they asked us to forgive them for what they did to us and we said we have forgiven them.

“They escorted us because they said if they leave us to go on our own; some of their partners may re-kidnap us. So they escorted us till where the people who came to collect us are.”

Another victim, identified as Hamza Buhari said the experience could easily qualify as the most terrible of his life.

“My experience is very terrible and hectic that I don’t wish my enemy. They took us inside the bush. We walked for 24 hours. They moved us from one point to another. They convey the elderly with motorcycles. They beat us daily. They gave us rice on our hands. The experience was very bad,” he narrated.

Meanwhile, the Governor of Niger State, Abubakar Bello, on Sunday received the 53 passengers abducted by bandits from the bus belonging to the Niger State Transport Authority (NSTA) in Kundu village, along Tegina- Minna road in the State.

Bello while speaking on the development noted that the abductees were released due to a series of dialogue and consultations.

The travellers were handed over to the Niger State Government on Sunday after one week in their kidnapper’s den.

They arrived at the government house at exactly 11:15 pm yesterday, in four 18-seater buses.

The Niger State Governor noted that before releasing the victims to their families, they would have to undergo medical checkups and evaluations.

The Governor also disclosed that those abducted from Government Science College, Kagara were yet to be released.