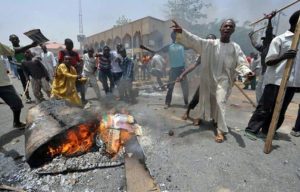 It was gathered that the conflict started on Wednesday when some youths from Tiv and Jukun ethnic groups attacked Danacha village at about 6 pm and burnt some houses belonging to the two tribes.

A source told The Nation that some gunmen dressed in Army uniform stormed Kwararafa village at about 5.30 am on Thursday morning and shot two persons to dead.

According to the source, Jukun and Tiv Youths in Danacha and Kwararafa villages have poised for a showdown in the area as at the time of filing this report.

Recall that Tiv/Jukun ethnic groups have reportedly clashed constantly over ownership of Danacha village which was renamed Kwararafa by the state government two years ago.