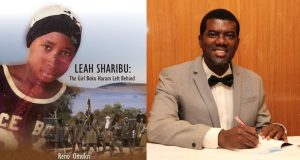 Reno Omokri, a former new media aide to ex-President Goodluck Jonathan, has slammed Aisha Yusuf over comments made against him.

Recall that Omokri had over the past attacked Ezekwesili over the group’s reluctance to continuer the Bring Back Our Girls campaign under the administration of President Muhammadu Buhari.

In a recent post on Twitter, Yusuf had alleged that Omokri, was doing the #FreeLeahSharibu Cam­paign to get money for his personal use.

Aisha Yusuf had described Reno Omokri as a political terrorist who used the name of kid­napped Dapchi schoolgirl, Leah Sharibu to enrich himself.

Aisha had said, “Polit­ical terrorists like Reno Omokri will talk about Leah Sharibu and use her for his selfish gains.”

The former presidential aide made a pledge of N50 million to anyone that will be able to produce any evidence that he has in one way or the other benefited any money from the #FreeLeahShari­bu campaign which he has been on for long now.