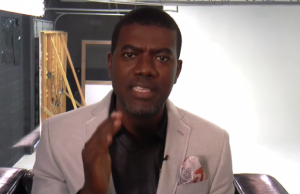 A former aide to ex-President Goodluck Jonathan, Reno Omokri, has reacted to the abduction of some students of Government Girls Secondary School, Jangebe, Talata Mafara local government area of Zamfara State by gunmen suspected to be bandits.

Naija News had earlier reported that gunmen stormed the school in the early hours of Friday and abducted the schoolgirls.

A development was confirmed by the Commissioner of Security and Home Affairs, Alhaji Abubakar Dauran while addressing newsmen.

Reno in his reaction to the abduction noted that the Friday incident is a result of paying a ransom to bandits.

The former presidential aide further stated that if the kidnapping happened under a Southern Christain, he would have been impeached.

Reno wrote on his Twitter account, “Another day, another abduction. This is the result of paying a ransom to bandits. It is obvious to all that General @MBuhari lacks the capacity to govern Nigeria. If these happenings had occurred under a Southern Christian, he would have been impeached long ago.”