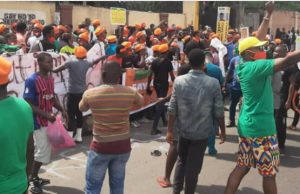 #RevolutionNow protesters that were arrested in Ondo State earlier on Thursday have been released by the Nigerian Police.

Naija News reports that protesters were arrested in Ore area of the state while demanding for good governance from the administration of President Muhammadu Buhari.

Shortly after the arrest, they were forcefully taken to the Ondo Police Command in Akure, the state capital.

It gathered that the protesters were released by the police after being warned not to participate in demonstrations anymore.

This online news platform reports that Nigerians had come out en masse to protest against perceived bad governance by the present administration.

The Revolution Now protest which was held across Nigeria today, October 1st, led to arrest and clashes between protesters and security agents.