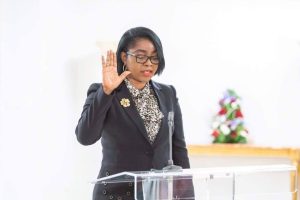 Naija News learnt that the choice of the woman who is also the former defence minister, for the Central African country comes on the hill of a major cabinet reshuffling in bongo’s Administration.

The appointment which was made known on Thursday, July 16th 2020 through a presidential decree saw Raponda become the first woman in the country to hold the office of Prime Minister and also control President of United Cities and local governments Africa.

On February 12, 2019, Ms Raponda was appointed defence minister by President Ali Bongo Ondimba, after the failed coup in January. She has a degree in Economics (Public Finance) from the Gabonese Institute of Economy and Finance.

This will be the fourth shakeup since an attempted coup in January 2019, which occurred while Bongo, 61, was in Saudi Arabia recovering from a stroke. Bongo has ruled the oil-producing nation since winning 2009 elections held months following his father’s demise. Omar Bongo died in office after 41 years in power.