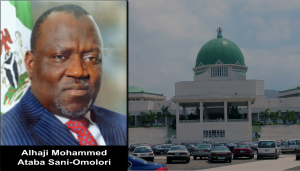 NASC had in a statement by its Executive Chairman, Ahmed Amshi, on Wednesday approved the immediate retirement of Omolori and 149 others.

The tenure of the clerk and others had been a matter of controversy because of the implementation of the National Assembly Revised Condition of Service, which took effect in 2019.

But in a statement seen by Naija news, Omolori said the commission does not have the powers to set aside the revised condition of service passed by the previous assembly.

He directed all staff of the legislative chamber whom the commission asked to proceed on retirement to disregard the directive and “go about their lawful duties”.

Naija News Understands that Ahmed Amshi, the commission’s chairman, had approved the retirement age for national assembly staff as 60 years of age or upon 35 years of service, contrary to the requirement stated in the amended conditions of service.

A plot by the previous assembly saw the conditions of service of the national assembly staff being amended, increasing the requirement of retirement for the staff to 65 years or 40 years of pensionable service.

Naija news recalls that Folasade Yemi-Esan, head of service (HoS), had last week faulted the extension of service of Mohammed Sani-Omolori, clerk of the national assembly.
In a memo to Senate President Ahmad Lawan and Femi Gbajabiamila, speaker of the house of representatives, Yemi-Esan said the public service rules provide only “for attainment of 60 years of age or 35 years of service for an officer to