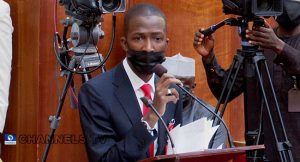 The Senate has confirmed Abdulrasheed Bawa as the new chairman of the Economic and Financial Crimes Commission (EFCC).

Bawa while speaking before the Senate on Wednesday said Nigeria must recover all stolen assets for the betterment of its citizens.

The New EFCC boss further stated that he will work with strategic partners around the world to see that Nigeria benefits from the repatriation of assets stolen from her coffers.

He added that the anti-graft agency will achieve its independent objective by sharing information with its partners.

Bawa during his screening promised that the constitution will guide his actions as the Chairman of EFCC.

He promised that at the end of his tenure, the EFCC will be a better place than he met it, noting that his training by the FBI and the National Crime Agency of the United States and the United Kingdom respectively will come in handy.

Responding to questions regarding what he will do differently from his predecessors, Mr Bawa said he will reposition the commission by ensuring that it strengthens its standard operating procedures and improve on them.

He also stated that there will be more transparency and accountability.