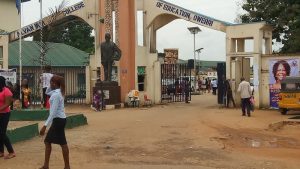 The dead has been reported of a senior lecturer at the Alvan Ikoku Federal College of Education (AIFCE).

Mr Echetama was said to have slumped on Tuesday, February 17 while delivering a lecture. Naija News understands that his demise was made public in a statement by the Acting Public Relations Officer (PRO) of AIFCE, Mr. Joseph Okwulehi.

Okwulehi told reporters that the Provost of the college has called for a meeting over the incident, adding that the management had also urged staffs and students of the institution to remain calm while they await the official position of the institution on the issue.

His statement reads: “I can confirm to you that a senior lecturer slumped in a classroom on Tuesday and was confirmed dead at the Federal Medical Center (FMC), Owerri.

Naija News understands that Echetama until his death was a senior lecturer at the Department of Business Education.

Though there were suggestions that the lecturer died of COVID-19 disease, the cause of the lecturer’s death is yet to be ascertained. Reports alleged that some students of the institution were seen evacuating the school hostels, while others fled the school premises for the fear of contracting coronavirus.

Confirming the incident, a final year student of the institution, Mr. Frederick Anyawu, said the development has forced lecturers to suspend lectures.

He said students decided to keep away from the college until the issue is sorted out.

A former member of the House of Representatives during the second republic, Dr. Junaid Mohammed is dead.

His death was confirmed on Thursday evening by his brother, Dr Ahmed Salik, a former lecturer with the Bayero University Kano and also a former member of the House of Representatives, Naija News understands.