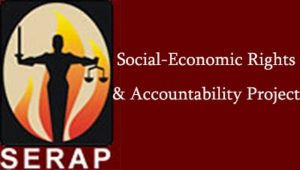 A police raid at the former Managing Director of the Interim Committee of the Niger-Delta Development Commission (NDDC), Nunieh’s residence, has been condemned The Socio-Economic Rights and Accountability Project (SERAP).

Displeased with the development, Rivers State Governor Nyesom Wike arrived at Nunieh’s residence and took her away to the government house.

Reacting to the incident, SERAP urged police and security agencies to focus on investigating grave allegations of corruption in NDDC rather than harassing Nunieh.

In a series of tweets on its official Twitter page, SERAP said the harassment was apparently a plan to stop Nunieh from speaking out on corruption in NDDC.

The post read: “We condemn the harassment and intimidation of Joy Nunieh, former acting MD of NDDC by the Nigeria Police apparently to stop her from speaking out on the grave allegations of grand corruption in NDDC and impunity at the highest level of the agency.

Nunieh and Godswill Akpabio, have been engaged in a shouting match over the crisis rocking the NDCC, this is even as the Ex-NDDC director was due to appear before a Senate panel in Abuja, yesterday for alleged misuse of N40 billion NDDC funds by the Interim Management Committee (IMC) before the police stormed her house.

The human rights group held that silencing or harassing her would not resolve concerns being raised by Nigerians over corruption allegations in NDDC.

“Nigerian authorities should focus on promptly and thoroughly investigating the grave allegations of corruption she has made instead of harassing and intimidating her for raising these allegations if the authorities are truly committed to fighting corruption in the country.

“Storming Joy Nunieh’s residence and silencing her isn’t going to resolve Nigerians’ concerns over the growing and widespread allegations of corruption and impunity in NDDC,” the tweet added.