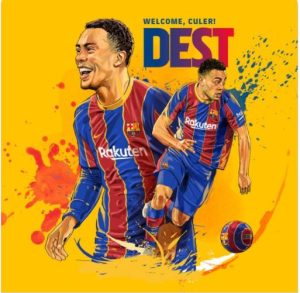 Spanish giants FC Barcelona have announced the signing of right full-back Sergino Dest from Ajax for 21 million euros plus a further 5 million in variables.

Dest, who signed a five-year contract, will have a buyout clause at 400 million euros.

The Catalan club said the new signing will be presented on Friday afternoon.

In a statement on its official website, Barcelona said: “Sergiño Dest combines many excellent qualities needed in a full back: attacking when called for, solid defensively, unruffled in possession and creative with it.

“The defender has the ability to take players on and his pace is a virtue going forward and defending. Those qualities will be on display from now on in a Barça shirt, a challenge for a fearless young full back.”