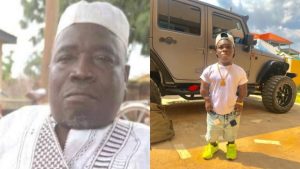 Bundle in his post captioned the picture of his father, Alhaji Iddrisu with a saying “RIP to my real father, dead today”.

The news is coming after Shatta Bandle featured in a song dubbed ‘Blessings’ with AY Poyoo, Ablekuma Nanalace which was released over the weekend.

Information gathered revealed that Shatta Bandle’s father has been ill for some time and gave up the ghost on Monday morning, however, the cause of his death was not revealed.