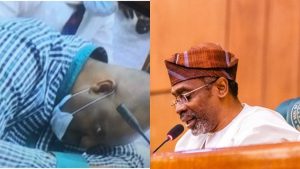 The Speaker of the House of Representatives, Femi Gbajabiamila, on Monday announced that the Acting Chairman of the Niger Delta Development Commission, Kemebradikumo Pondei, would not appear before the committee again.

This is coming after the acting NDDC boss slumped during the ongoing presentation before the committee set up to investigate the alleged misappropriating of funds in the commission.

The acting MD of the NDDC, Pondei, while speaking at the hearing slumped and was immediately rushed down to the hospital, bringing the hearing to a pause as the committee declared 30 minutes break to continue with the meeting.

The speaker after the resumption of the session noted that the house committee will adopt the written response of the NDDC managing director.

“There would be no need for the MD of NDDC to appear anymore since he has submitted a written response.”

“I wish Mr Pondei safe and speedy recovery and I have also sent the Medical Director of the National Assembly to follow up to ascertain the condition of the MD. Thank you very much and I, therefore, hand over to the current chairman of the Committee, Mr Thomas Ereyitomi to continue with the hearing”.