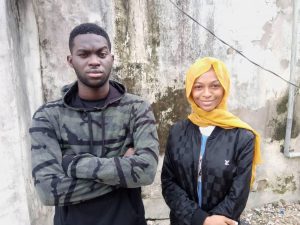 The cases of internet fraud keep rising in Nigeria at an alarming rate with a few top social media influencers getting dragged into the messy waters of cyber fraud. The latest shocking case is that of fast-rising social media engaged, Adeherself who was accused by Nigeria’s main anti-graft agency of being ‘cyber picker’ for her ally’s

It will be recalled that Naija News reported earlier that the United States government indicted six Nigerians for engaging in a cyber act targeting several businesses and individuals within Northern American country.

Speaking on the recent shocking revelation about the talented social media activist who was seen In the picture uploaded smiling, The Economic and Financial Crimes Commission said that it arrested five alleged internet fraudsters including Adeherself, with pictures of the suspects appended unto the statement.

Going Further, EFCC said on Twitter on Tuesday night. During interrogation, Adewale, a self-acclaimed model, who goes by the username @adeherself on Instagram, confessed to being a picker” in cybercrimes. He usually poses as a lady to hoodwink her foreign ‘preys,’” the statement read.

Here is the EFCC’s tweet below confirming the tweets