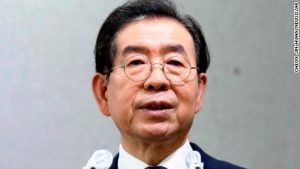 The Mayor of Seoul, Mr Park Won-soon has reportedly been found dead a couple of hours after he was announced missing.

Naija News learnt that his body was discovered yesterday by police officers at Mount Bugak, the Northern part of Seoul.

This online news media had reported earlier that South Korean Police have swung into action, following the disappearance of the mayor of the South Korean capital Seoul, Park Won-soon.

Though the cause of his death remained undisclosed at the time the report was given but it was gathered that the Mayor was reported missing not long after he was accused of sexual harassment.

The 64-year-old was said to have been long seen as a potential presidential candidate in the South Korean, it was though unclear if he had murdered himself but reports had it that he was traced to the place where his body was found via his phone signal.

Naija News understands that the unexplained death of Won-soon follows after former Seoul City employee reportedly filed a police complaint, allegedly his involving sexual harassment on July 8, 2020. However, it has not been proven that the allegation resulted in his sudden death.

According to facts, the Mayor would be the highest-profile South Korean politician to have killed himself if the submissions of possible suicide were true.